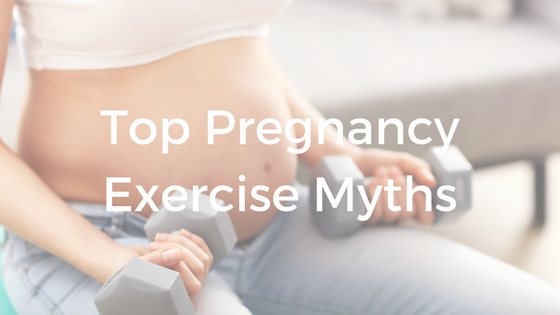 Not so long ago, announcing a pregnancy came with the immediate advice to put your feet up. Not to lift anything heavier than a cup of coffee (decaf of course!) and eat for two. Those days are (mostly) gone now and the idea of staying active and exercising during pregnancy is, for the most part, no longer met with surprise and concern. In fact you will probably find that your healthcare team will actively encourage you to exercise during your pregnancy.

However, you may still find that well meaning family, friends and colleagues give you lots of conflicting pregnancy exercise advice… Whether you are a seasoned workout junky or a newbie to the whole exercise thing, knowing what you should, and shouldn’t, do during your pregnancy can be incredibly confusing! Myths about the rights and wrongs of pregnancy exercise still abound. Here we will explore some of the most common myths. What is safe and what isn’t. With the aim to hopefully clear up some of the confusion you might have about how to be the active mama you want to be!

Exercise during pregnancy is recommended regardless of your previous exercise history. If you haven’t exercised before then going straight into high intensity exercise wouldn’t be the best idea. Starting slowly, choosing lower intensity and building up from 5 minutes a day to the recommended 30 minutes is sensible. A mixture of cardio and resistance training is best. With weights kept low and reps high, or bodyweight exercises for complete beginners. Move the weights up as you feel stronger.

For those of you who have been active prior to pregnancy it is safe to continue to exercise in your preferred way for as long as it feels good and you don’t experience any pain or dizziness. Although for those who partake in exercise with a greater risk of falls. Such as ice skating, horse riding and roller derby. Health professionals recommend that you switch to a lower impact form of training during pregnancy to reduce the risk of catastrophic falls.

The reasons behind miscarriage are complex, often a mystery and beyond your control. Exercise however is not one of the causes of miscarriage. Multiple studies have failed to show any link between moderate, or even high intensity, exercise and increased risk of miscarriage. The myth of avoiding weightlifting in pregnancy has also been disproven. Resistance training helps to maintain health in pregnancy. Although most doctors recommend light to moderate weightlifting due to increased relaxin which could possibly increase the chances of joint injury.

One form of exercise to avoid, particularly in early pregnancy, is anything in a heated environment. This is because an increase in your core temperature could pose a risk to the developing baby. Hot yoga, saunas and intense exercise on a very hot day should all be avoided.

When exercising during pregnancy, listen to your body. Increase time spent exercising and intensity gradually and stop if you experience pain or dizziness. The vast majority of miscarriages are beyond anyone’s control and the benefits of regular exercise (up to 6/7 days a week) during your pregnancy HUGELY outweigh any possible risks.

You shouldn’t let your heart rate rise above 140 beats per minute:

The idea that you shouldn’t exercise with any intensity when pregnant is now acknowledged as another pregnancy myth. Unless your doctor has specified that you should keep your exercise low intensity due to medical reasons. (In which case yoga, walking and light weights may be the best exercise options). Otherwise having your heart rate rise above 140bpm during activity is safe. Doing 30 minutes of moderate exercise on most days is by far the best way to prepare for the physical strain of late pregnancy and labour.

Being fit and healthy gives you the stamina to cope much better with what can be a very long and exhausting process. Becoming too exhausted to push is a common cause of the need for intervention during labour and regular exercise gives you a good base of fitness to hopefully help to avoid this.

Your heart rate can be very erratic during pregnancy so beats per minute is not the most accurate way to gauge exercise intensity. The best method to use is the ‘talk test’. Being able to still carry on a conversation during exercise is a good measure that the intensity is not too high.

Exercise can cause dangerous overheating

It is true that overheating can be dangerous for the developing baby, particularly in the first trimester. However, taking sensible precautions during exercise will help prevent any risk of overheating. By staying hydrated, wearing loose cool clothing, not exercising outdoors on extremely hot days and avoiding exercise such as hot yoga, you will be perfectly safe to exercise whilst pregnant. Sweating during exercise is normal and not necessarily a sign of overheating. However, being drenched in sweat, exhausted and unable to speak during a workout could be a sign you are overdoing it and should slow down.

You can’t train your abs during pregnancy

Many people believe you shouldn’t train your abs at all during pregnancy due to the risk of abdominal separation (diastasis recti). This is a simplification of the issue and a blanket ban on abdominal and core training makes no sense. You need a strong core during pregnancy as your body changes and your centre of gravity shifts. A strong core can help to prevent common issues such as back pain. Combined with resistance training, core training during pregnancy can help prevent postural issues and pain by encouraging good alignment of the pelvis and back. A strong core is vital post birth to avoid back pain when carrying and lifting your new addition!

So what should you do and what should you avoid? Diastasis recti is caused by the separation of the rectus abdominus muscles (your 6 pack muscles) as they are stretched over the growing bump. As such we want to avoid exercises that put undue pressure on these muscles. As doing so can cause the diastasis recti to worsen. Crunches, sit ups and other exercises such as front plank that cause flexion or tension in the rectus abdominus should be avoided during pregnancy.

However, there are multiple exercises that strengthen the core and abdominals without causing further abdominal separation. Pallof presses, dead bugs, pelvic floor exercises, diaphragmatic breathing, side planks and many more will all help to keep the core strong and prevent excessive diastasis recti from occurring.

Diastasis recti may well still be present post partum in most women. The good news is if you have a DR that having a strong core will aid in healing and you should find your abs come back together quickly after birth.

You shouldn’t exercise during the first trimester

Many women fear that exercising during the first trimester will cause miscarriage. However, many studies have shown no causal link between exercise and early miscarriage. The majority of miscarriages are chromosomal in nature and would occur regardless of how active or sedentary the mother is. If you are new to exercise begin slowly and build up exercise rather than jumping straight into long workouts. Listen to your body and be sensible but there’s no reason to avoid exercise entirely.

As humans we are designed to move, lift, carry and be generally a lot more active than we are in the modern age. Women in past ages would have regularly been pregnant due to lack of contraception. They had to be able to carry on the often physical and strenuous tasks that daily life demanded of them. Whatever stage of pregnancy they were at.

You shouldn’t lift weights during pregnancy

This myth is espoused for various reasons. From risk of miscarriage if you lift a heavy weight. To danger of injury as relaxin increases and makes your joints less stable. As discussed earlier, there is no evidential link between exercise and miscarriage and that includes strength training. With regards to relaxin, yes your joints will be more unstable during pregnancy as your body prepares to be able to carry a baby full term and deliver the baby safely. However, resistance training can help increase strength and stability through joints. Your muscles act as a protector for your more unstable ligaments and tendons.

A well planned and monitored strength training programme can help to avoid the aches and pains of pregnancy by maintaining good alignment and posture. Strengthening the muscles which help you to lift, squat, lunge, push and pull. By lifting weights you will be well prepared for everything that labour and motherhood will throw at your body.

All of my prenatal clients lift weights, safely and at a level that is suitable for them individually. Even if they have no previous experience of weight training we will still carry out a resistance training programme. Perhaps starting with bodyweight resistance and learning proper form and then progressing to weights as they gain confidence and experience.

Lift weights mamas to be, your body will thank you for it!!

If you are interested in pregnancy (or postnatal) training in the Surrey area take a look at my Pregnancy and Postnatal Training page for more details.